As a long standing member of the team at Acumen Anthony has worked on a wide variety of projects and here he takes a look at some of the diverse jobs he’s be involved in over recent years.

I have worked for Acumen now for 7 years. During this time I have worked on many large, medium, and small projects. These have ranged from tank cleaning projects utilising specialist jetting equipment and sometimes high risk in nature to large scale waste movements through Europe. Not one of these projects that I have took part in have been the same, this sort of variety and diversity definitely keeps you on your toes! 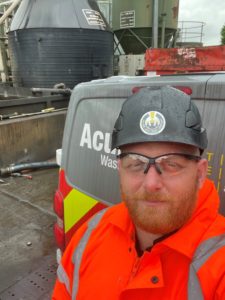 My three most notable projects have been very large scale.

The first being the repatriation of 4,000 tonnes of illegally exported waste from various sites in Poland back to the UK on behalf of the Environment Agency. This project presented many challenges from inception to completion. Things such as how do we get the waste through neighbouring countries and back to the UK? What logistics companies are best suited to partner this task? How do we source plant in Poland? How will the Polish winter affect the removal process? Luckily the team at Acumen have a very broad skill set and these questions became solutions very quickly and the team were deployed within 4 weeks from start of planning. This waste was packaged and loaded onto curtain siders at the Polish sites and then delivered to Landfill in the UK. The project was completed in a timely and safe fashion! The beer wasn’t bad either!

The next major project came soon after. The former Alex Smiles site in Sunderland required the removal of 30,000 tonnes of waste to allow future development and the Acumen team were called in by the local authority to make this happen within a very tight timescale. Again, this project presented its own challenges, such as fire damaged hazardous waste to trommel fines. All of this waste was segregated and loaded onto walking floors for transport to landfill. The team on site were at one point managing to fill up to 30 trucks per day. This project was completed on time and with zero safety incidents leaving a very happy client. As it stands this is Acumens largest project to date.

The most recent project Acumen has completed was the decontamination, dismantling and demolition of a Heavy fuel oil tank farm located on the former British steel site in Redcar. The removal of this tank farm was key in allowing further development of the site. The HFO farm contained 600 tonnes of waste HFO. This required quite a complex system to allow for heat to be applied and the oil to be pumped to road tankers for transport. Once the oil was removed the tanks and associated pipework, boiler houses etc could be removed.

In summary I’ve found every project to be complex, challenging and diverse with Acumen yet equally rewarding upon completion. The great thing with Acumen is the team! We have the best people and knowledge within the industry to make these projects a success!