Acumen’s Chief of Staff, Adam Hindson, looks at the role psychology and mindset plays in ensuring a safe working environment and how this should be considered at all times.

Count Helmouth von Moltke, the Prussian General (Moltke, 1869) pointed out; “that in the next war our needlegun will not again be opposed by a far inferior rifle but, on the contrary, an entirely equal weapon.  Superiority is no longer to be sought in the weapon, but in the hand, that wields it.” This suggests that the individual in our organisation is our ‘agile edge’ and that its future success will heavily rely on the way we nurture talent and engage with our people.

As a former army officer this resonates with me.  Over the course of 24 years, I progressed through the ranks and never stopped learning, about myself, others and leadership.  What remained a constant though, is that people are at the heart of what we do.  In battle and in barracks, in the field and in the boardroom there are different challenges and what becomes a priority to individuals reflects the conditions in which they operate, such as; feeling worth, being a valued member of the team, beliefs that align with one another and mutual respect.  The Army consolidate these in doctrine; the moral part of ‘fighting power’ and form the basis of their Leadership code and subsequently ‘values and standards’, namely the core values of; Courage, Discipline, Respect, Integrity and Selfless commitment.  Workplace safety also relies on its people to drive its culture.

The psychological contract as defined by Rousseau (1989:128) has similarities to the Army’s approach:

“In sum, psychological contracts are characterised by (a) an individual’s belief (s) in reciprocal obligations between that individual and another party, (b) where one party has paid for or offered a consideration in exchange for a promise that the other party will reciprocate (i.e., fulfil its promise), (c) where both the promise and the consideration are highly subjective (i.e., existing in the eye of the beholder, the individual), and (d) where nonetheless, the individual holding a belief in a psychological contract attaches to this belief assumptions regarding good faith, fair dealing, and trust, treating this contract as part of the larger fabric of the relationship.”

Clutterbuck (2005) describes the psychological contract in a way that can be used more productively in the work environment, He describes it as the “unwritten assumptions by employers and employees about the appropriateness and value of the social exchange between them”.  Clutterbuck establishes that value has three core meanings; worth, respect and belief (SEE FIG1).

Value, in terms of worth, relates to how each side creates added value for the other.  For example, the employee works hard to maintain profits; the employer provides a decent salary and pension benefits and further training to enhance skills and create better future job opportunities.  Value, as respect, refers to how the employees feel about the organisation and how they feel the organisation regards them.  Do they feel pride in the organisation?  Do they feel recognised for their hard work?  Is recognition or promotion based on merit or whose face fits?  Lastly, values as a belief relates to the degree of alignment employees feel between the values they hold and the company such as: honesty, loyalty and commitment.

The latter description of the ‘psychological contract’ and the Army’s ‘core values’, both describe reciprocal arrangements, though only one relates to this as a Leadership function.

The well-known 5 elements of Behavioural safety include ‘leading by example’, and indeed the new ISO45001 Standard introduces a key change; Leadership has been enhanced to ensure commitment & active support from top management, specifically developing, leading and promoting a culture in organisation that supports the OH&S management system.  In order to facilitate ‘change’ to behaviours, engagement at the ‘doing’ level always remains the ‘rubix-cube’, that all leaders endeavour to align.

Industries such as which I have worked since leaving the armed services, such as waste management and industrial services, pose this very challenge that I believe many others face.  Although ‘management’ are fully committed, robust plans, processes and procedural systems including Behavioural Safety programmes exists, converting this into something that those in the ‘line-of-fire’ adopt and embrace is sometimes like the ‘rubix-cube’, an enigma.

Behavioural safety approaches were first developed and applied in the US in the 1970s. Komaki et al. provided one of the early studies of the application of behavioural approaches to improve occupational safety in the food manufacturing industry. Their study demonstrated that defining safe working practices through behaviour and then reinforcing them positively offered a way of promoting safe behaviour at work.  As described by IOSH; Behaviour can be defined as an action by an individual that is observable by others. It’s estimated that in up to 80 per cent of work-related accidents, employees’ behaviour – in the form of acts or omissions – is a contributing factor.  Such behaviour can pave the way for many pre-existing factors to come together in a negative event. There are many reasons why employees engage in ’at-risk’ behaviour at work and these are well documented.  But what influences this behaviour?

Long before acts or omissions take place, there is an unexplored area, even when strong processes and procedures are in place that leaders can learn to understand and explore.  The ‘psychological contract’ as defined by Clutterbuck, is best related to behaviour when considering its implications when violated or breached.  A violation refers to broken promises, therefore are more likely to produce emotions of anger and go beyond disappointment; they may even produce feelings of betrayal.  A breach conversely is generally short-lived and may return to a relatively stable psychological contract ‘state’ however, it also holds the potential of escalating to full violation.  It is therefore implied that such feelings could manifest themselves in human factors.

The HSE definition of human factors further support this theory:

‘Human factors refer to environmental, organisational and job factors, and human and individual characteristics which influence behaviour at work in a way which can affect health and safety’.

A simple way to view human factors is to think about three aspects: the job, the individual and the organisation and how they impact on people’s health and safety-related behaviour.  Some examples of human factors:

The examples given, demonstrate a potential correlation between the psychological contract (breach or violation) and the three aspects of human factors should there be an absence of control measures to mitigate the impact of human factors, as pictured in the below model (SEE FIG 2). 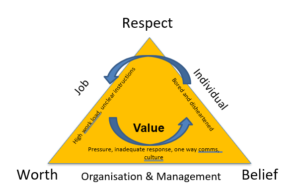 Emerson said, “Trust men and they will be true to you. Treat them greatly and they will show themselves to be great.”   Our people are our greatest asset and the impact of failing to lead them and manage them can have catastrophic consequences in terms of adverse events.  The core values eluded to placing ‘leadership’ at the forefront of the moral component, it acknowledges the significant impact of interaction at the individual level and encourages everyone to believe in the ethos and the big six; Courage, Discipline, Respect for others, Integrity, Leadership and Selfless commitment.

What I discovered as a young commander, was that understanding people, being able to communicate with them in a way that they will respond positively, helps in enforcing change.  It gives confidence that even when you’re not there to observe, that people are doing the right thing; wearing the right PPE, not walking by and leading by example.  The psychological contract is a relatively recent phenomenon to me, albeit the outcomes appear to be familiar and not a surprise but a re-enforcement and a slightly different way to solve the enigma and complete the ‘rubix-cube’ that’s behavioural safety.