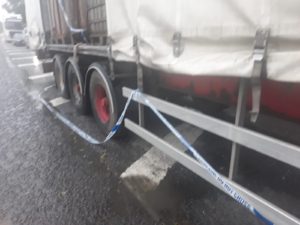 In early October 2020 Acumen’s Emergency Waste Response team was contacted by a local council to deal with an urgent matter that had been referred to them by the Police. The problem arose from a curtainside trailer that was found to be leaking on a regional motorway and emergency spill clearance was required. The severity of the situation meant that full site clearance was required as it was not initially clear as to what exactly was leaking from the trailer and it was feared that the trailer could contain hazardous material needing specialist attention.

Acumen immediately sent a team of emergency waste response specialists to the scene of the incident where they set about laying out spill matting and booms to avoid any substances entering the drains. The spill matting and booms along with the trailer were supervised by Acumen over night until daylight arrived. Throughout this period the Acumen team worked in tandem with all relevant authorities. As well as this, during the evening an Acumen chemist attended the site to monitor the situation as well as to assess the material that was leaking from the trailer and to prepare the necessary containers, labels and paperwork. 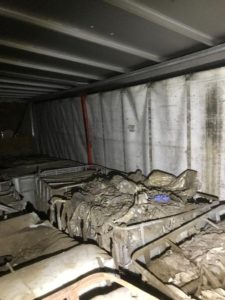 During the early hours a West Yorkshire Hazmat Police officer attended the site and following detailed consultation they deemed the Acumen plan of action to be safe and suitable. Subsequently, once Acumen had secured the load, the police arranged a police escort to our Knottingley facilities which meant we were able to temporality break weight limits on smaller backroads and effectively allowed Acumen to deal with the situation quickly and efficiently. As well as this all residual material that was on the road and on the outside of the trailer was cleaned to make it safe to travel to Knottingley.

Throughout the entire process the specialist chemists and emergency response team members at Acumen were able to safely and efficiently deal with clearing this emergency hazardous waste spillage.

The versatile skillset of the Acumen team means that we can offer expert advice on emergency spills such as this. Importantly we monitored the situation overnight and ensured safe, compliant practices were at the heart of every recommendation and action.