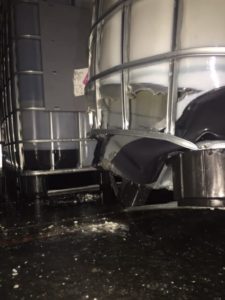 In late September 2020 The Emergency Response Team at Acumen received a call at 9pm from the Police Authority and Environment Agency with regards to a toxic chemical leak on the A19 South at Exelby. The leak had occurred on a curtain-side trailer which was transporting sixteen 1,300ltr IBCs containing solvent and four 1,000ltr IBCs which contained aqueous alkaline sulphide waste when the issue arose and it needed to be addressed immediately to ensure the safety of local residents, road users and wildlife.

Within one hour of receiving the call Acumen’s team of highly trained, specialist, operatives were on site in full chemical suits ready to tackle the problem safely and effectively. Upon arrival the road was closed due to toxic organic corrosive liquid which was leaking from the IBCs and had subsequently entered the drainage system at the southbound Exelby Services. Having been originally reported due to the noxious smell created by the leak, residents within the surrounding area were instructed to stay indoors and keep their windows closed. 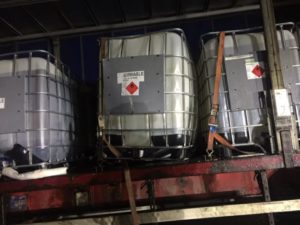 Once the area was secured Acumen went about dealing with the damaged IBCs which had initially started when an IBC containing the sulphide waste had started to leak earlier along the A19. This problem was then exacerbated by the leak which came from the IBC containing solvent further down at the A19 towards Exelby Services. It was established that this incident had also caused contamination to the interceptor and this was also dealt with.

Having fully dealt with the scene the Acumen team of specialists completed a full clean up of the area ensuring it was completely safe for local residents and road users.

This particular job was another perfect example of the capabilities of Acumen's Emergency Response division and their ability to react quickly and effectively to an urgent call out. Our team of specialists were on site within one hour of the initial call and the situation was dealt with quickly and safely.